Behind the grape: checking out US Chardonnay

As today is Chardonnay Day, one of our US team has taken a look at this polarising white wine and explored how it manifests itself across America.

Chardonnay is a grape that Americans tend to either love or hate! The phrases you most commonly hear about Chardonnay are “Anything but Chardonnay” or “I only drink Chardonnay. Period.” Yet it is a white grape variety that can be made in a wide range of styles. It can grow in cool, moderate and warm climates; with resulting differences in acidity, aromas, flavours, body and alcohol.

There are also lots of options for Chardonnay grapes in the winery. Famously, or perhaps infamously, some styles of Chardonnay are made with extensive oak contact, as well as malolactic fermentation and lees contact; creating a toasty, buttery, creamy wine. At the opposite end of the spectrum, some winemakers choose to block malolactic fermentation and eschew oak for stainless steel; resulting in a purer expression of Chardonnay’s varietal characteristics. In warmer regions, where natural acidity may be low, acidification is used to help create a fresher style.

When talking about Chardonnay in North America, we have to start with California. Californian Chardonnay is renowned for making full use of winemaking techniques such as malolactic fermentation, lees contact, and oak barrel fermentation and maturation. The resulting ‘typical’ style is full-bodied, with ripe stone and tropical fruit and a distinctive toasty, buttery character. This is not, however, the only style of Chardonnay that California produces. As a state, almost twice the size of the United Kingdom, California has many sub-regions - also known as American Viticultural Areas or AVAs - that produce different styles and expressions of Chardonnay. Here are some examples:

The Central Valley is California’s engine of bulk Chardonnay production. This inland region is hot, and its wines tend to be stereotypically Californian; with effusive oak and butter flavours, low to moderate acidity, sometimes extra ripe fruit. These wines tend to be inexpensive to mid-priced, so any oak influence is likely to have come from oak chips or staves.

Moving towards the coast, Santa Barbara County makes a range of Chardonnay styles. The region has a relatively cool climate, due to its East-West mountain ranges that allow brisk Pacific Ocean sea breezes to travel inland and keep temperatures low. Depending on where the grapes are grown, Chardonnays from Santa Barbara can be medium-bodied, high acid wines with citrus and stone fruit flavours or fuller-bodied, medium acid wines with stone fruit and tropical flavours and aromas.

Further north, Carneros is another relatively cool AVA that straddles the southern part of both Napa and Sonoma counties. The San Pablo Bay funnels cool air into the region; allowing fresh, high acid Chardonnay production - some of which even gets made into crisp, sparkling wines.

Sonoma, another coastal region, also benefits from the cool breezes of the Pacific Ocean. Sonoma has a multitude of sub-appellations; with unique microclimates depending on their proximity to the coast, elevation, and other natural factors. As a result, Chardonnay styles vary within the region; but most have ripe fruit flavours and medium to high acidity.

Napa Valley is warmer and sunnier than Carneros or Sonoma and therefore creates full-bodied Chardonnays with pronounced tropical fruit flavours. Napa Chardonnays tend to be made in the ‘stereotypical’ Californian style - though generally at very good to outstanding quality levels and premium prices. There is liberal use of new oak, as well as malolactic fermentation and lees contact. This results in a rich, buttery style; but the best examples are also balanced by refreshing acidity. This acidity is preserved by Napa’s cool nighttime temperatures. 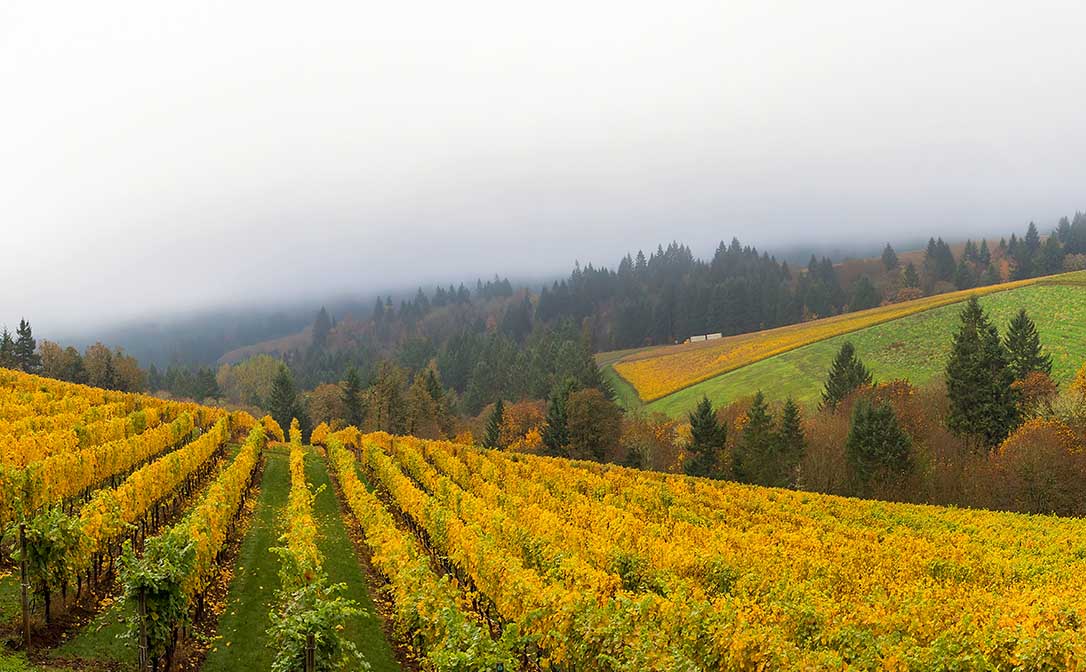 Outside of California, the state of Oregon makes some of the United States’ best-regarded Chardonnays. Oregon’s climate is sometimes compared to Burgundy in France, where Chardonnay is the main white grape variety. Oregon Chardonnays tend to have lively, high acidity because of the cool climate. Depending on the vineyard location, flavours and aromas can range from citrus, herbs and green fruit to stone fruit and more tropical notes of melon. Oak usage varies by producer.

Washington State is well-known for its red wines, but Chardonnay is its third most planted grape after Cabernet Sauvignon and Merlot. Washington Chardonnays tend to fall between California and Oregon in terms of ripeness and acidity and are made in both stainless steel and oaked styles. The state’s varied climates and soil types also contribute to its diversity of Chardonnay styles.

Riesling reigns supreme in the Finger Lakes, but Chardonnay has been gaining in popularity in this upstate New York region. Very much a cool climate region, the Finger Lakes has not historically had much success with ripening Chardonnay, but advances in the vineyard and winery have made possible crisp, high acid, yet balanced Chardonnays. Finger Lakes Chardonnays can be oaked or unoaked and many have flavours of green apple, citrus and wet stone.

The Future of American Chardonnay

In recent years, there has been a definitive shift away from overly ripe ‘butter bomb’ Chardonnays in the United States. Instead, the trend in California and the rest of the United States’ Chardonnay-producing regions has been toward more balanced styles with moderate or no oak use.

These styles tend to be lower in alcohol and have crisper acidity, even if the fruit remains ripe. The new American Chardonnays tend to showcase the variety’s character and versatility more effectively, so consumers who haven’t traditionally liked Chardonnay may now want to revisit the category.

We can only give you a snapshot of the Chardonnay grape here, but if you are inspired to take your wine knowledge to the next level, don't forget WSET qualifications are available online. To find out more about WSET’s Online Classroom, and for a taster of what to expect, click here.