This International Women’s Day (IWD), WSET are running a week of virtual events starting Monday 7 March to shine the light on leading women in wine.

This International Women’s Day (IWD), WSET are running a week of virtual events starting Monday 7 March to shine the light on leading women in wine. Through a series of live 20 minute interviews, we will celebrate achievements, explore career paths and reflect on lessons learned by talking to inspirational women from around the world.

Michelle says "The change I'd like to see in the drinks industry is...a bigger collaboration within the industry to adapt and mitigate climate change."

These sessions are free to attend and open to anyone looking to start or develop their career in wine.

The theme of #IWD2022 is #BreakTheBias, celebrating women’s achievement, raising awareness against bias and taking action for equality. 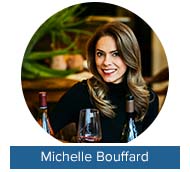 Michelle Bouffard DipWSET, Founder, Tasting Climate Change
Originally from Quebec, Michelle moved to Vancouver to complete her Bachelor of Music degree in classical trumpet where she unexpectedly ventured into wine while working in a fine dining restaurant. Determined to make her mark in the wine industry, she graduated as a sommelier with the highest honours from the International Sommelier Guild in 2003 and completed the Diploma from the Wine & Spirit Education Trust (WSET) in 2005. Michelle was the co-owner of House Wine from 2003 to 2015, a highly regarded company based in Vancouver that specialized in cellar management and educational events. She also founded and was also the president of British Columbia chapter of the Canadian Association of Professional Sommeliers. Michelle now lives and teaches WSET courses in Montreal and gives numerous training sessions including for wine associations such as Inter Rhône and Wine Australia. She works closely with the nursery Lilian Bérillon located in the Rhone Valley acting as a wine educator.