This International Women’s Day (IWD), WSET are running a week of virtual events starting Monday 7 March to shine the light on leading women in wine.

This International Women’s Day (IWD), WSET are running a series of virtual events starting Monday 7 March to shine the light on the career paths of three leading women in wine. Through a series of live 20 minute interviews, we will celebrate achievements, explore career paths and reflect on lessons learned by talking to inspirational women from around the world.

Emma says "The change I'd like to see in the drinks industry is...more diversity, not just more women but people from all backgrounds and walks of life. Some very positive steps are being made within the trade but it is still dominated by white men of a certain class. Events like IWD help to spotlight women working in the more male-dominated sections of the trade, like winemaking, but the institutions of the trade could really help to identify promising young people from less traditional backgrounds and encourage them into what is an exciting and vibrant industry."

These sessions are free to attend and open to anyone looking to start or develop their career in wine.

The theme of #IWD2022 is #BreakTheBias, celebrating women’s achievement, raising awareness against bias and taking action for equality. 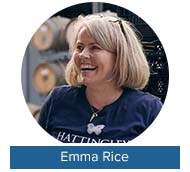 Emma Rice, Director and Head Winemaker, Hattingley Valley Wines Ltd
Emma started her career in wine at Oddbins, Domaine Direct and Hugh Johnson’s Pocket Wine Book. At the age of 29, Emma decided to study for the BSc in Viticulture and Oenology at Plumpton College. After graduating, she went to Cuvaison Estate Wines in Napa Valley for the harvest and stayed for two years as oenologist and laboratory manager. She then worked a cool climate vintage at Tamar Ridge in Tasmania before moving back to the UK and becoming Head Winemaker at Hattingley Valley. Emma has won the UK Winemaker of the Year trophy twice and is now on the Wines of Great Britain Management Advisory Committee. One of Emma’s biggest achievements is the development of the young people who work at Hattingley Valley including the introduction of a Winemaking Apprenticeship in conjunction with the Vintners’ Company and WSET. Emma is also on the Diversity & Inclusion Committee for the Vintners’ Company.