Jeannie Cho Lee opened by setting the scene, “Twenty years ago the opportunity to be successful in wine and make a real career for yourself in wine was in the trade, export/import, wholesale, retail, F&B etc. and anything outside of it didn’t exist. When China became one of the top five producers of wine, of course they then also needed communicators, educators marketing people, business people, so there is a whole other industry that’s opened up really in the last 10 years.”

Communication was viewed as the basis of this new opportunity and Ian Harris began the discussion by sharing the figure that 85% of WSET education in Hong Kong and almost half WSET education across China is in English. This led to the question as to whether there is a disconnect between learning about wine in English compared to using the knowledge and operating businesses in Chinese.

Jeannie Cho Lee made the point that the relevant language for someone’s needs is dependent on their desired use of it, “When it’s consumers and they really have no ambition to ever do their WSET Diploma or a Master of Wine then I always advise them to take it in their local language because it’s easier. They catch meanings and nuances and they are able to not just take the educational material but make it culturally relevant. However, if you think that you are going to be doing the Diploma or you ever dream that you might possibly want to be an MW, I always suggest that you start out doing WSET Levels 1 and 2 in English. It’s a little bit like studying computer science or medicine or even business, if you are learning it in your own language you can only get so far because the latest information, textbooks and knowledge is actually very often in English and what that means is it becomes almost unreachable because of that language barrier.”

Terry Xu agreed that the language required is relative to the level of education and noted from a cultural perspective, “I think for the consumer wine education now is not only an education but is more of a communication skill. Even now in China if you talk to people about Cabernet Sauvignon in English it seems like you know wine better.”

Ian Harris summarised, “For us at WSET, we have a huge responsibility in providing wine and spirits education for the beginner to the professional globally. Language plays an important role in that. We strive to offer our entry level courses in as many languages as there is demand for to give a good level of education to a wide audience. However we recognise that when you reach the Diploma English is a universal language for the trade.” 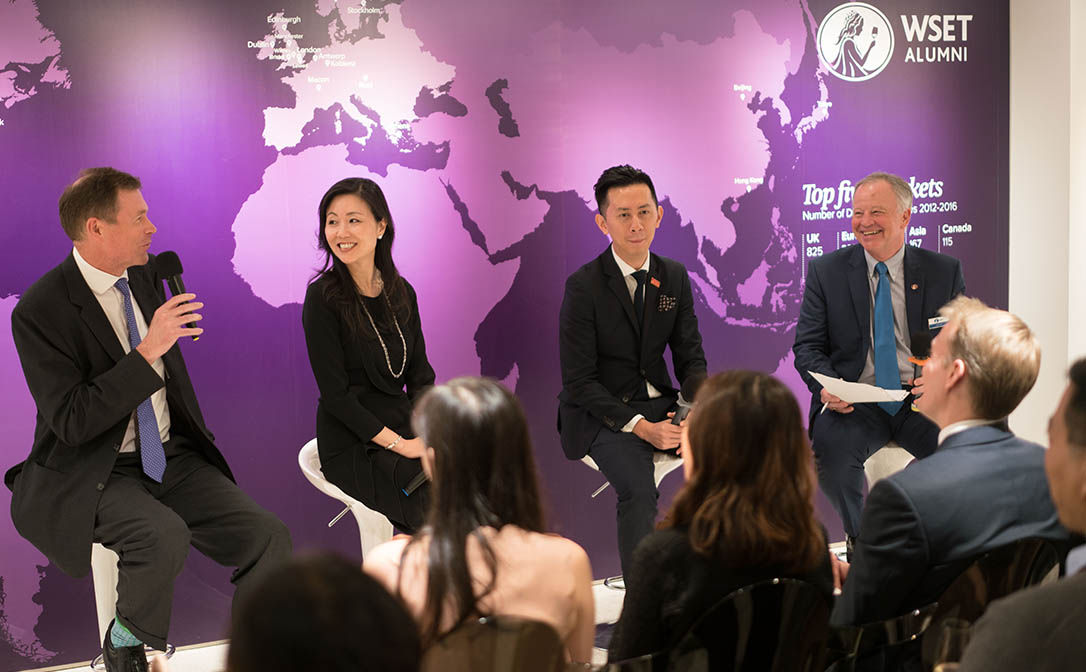 A key difficulty identified by all panelists was the complication with translating brand names and specific phrasing.

Jeannie Cho Lee commented, “I have about 20,000 wine notes that are translated into Chinese so I face this difficulty every day. The question is are you taking the name that’s registered by the importer, are you taking the name that’s being used by the local media, are you taking the northern Chinese version of that name or are you catering to the whole province. The translation is a huge issue and I think the only way to really solve that in my mind is always to have the original name in parenthesis in English next to it if you have any doubt. Wine description is about nuance and about being able to relate in a cultural way and so if you take something literally it actually doesn’t translate so you have to be slightly poetic in the way you translate. Names in Chinese don’t go more than three syllables and yet you have these place names and producers that are 10 characters long because they are translated phonetically and it doesn’t make sense.”

Sean Robson shared the perspective from his position in regular contact with customers on the shop floor as to how confusing the language labelling is for them when choosing a wine or spirit, “You get a cross section in the stores that we’re operating in here. In stores like Oliver’s and 360, consumers have a pretty good understanding but if you go out further they tend to go straight for the known brands and this is where the beauty of marketing comes in as people look for brands they know.”

The panel agreed that brand awareness was of key importance to Chinese wine and spirits consumers, particularly as a relatively new but rapidly growing market. However, the perseption of what a ‘brand’ is in the eyes of a consumer was questioned, as in China Bordeaux as a region is well-known and widely regarded as a brand in itself whilst consumers are generally less aware of the chateau names and focus more on price.

Ian Harris followed up to ask the question as to what the Chinese wine and spirits industry should be doing to help consumers understand that quality wines and spirits are not just about brands.

Jeannie Cho Lee responded, “I think that when you are dealing with people who are not as familiar with wine the most respectful thing that one can do is ask them what style they enjoy or what wine they liked and from that information you try to direct them in a way that’s not confusing. The beauty of wine is that you move up and become even more fascinated and the fact that it is so diverse and so fragmented and difficult for marketing people is what makes it interesting and fascinating that we’re forever learning.”

Terry Xu commented on the role that education should play, “The new generation in China are eager to learn but you can only ask them to learn when they are ready. There is too much focus on knowledge now, what we lack is passion. We need to bring passion to inspire the desire to learn more.”

Ian Harris agreed, closing with, “Education comes through many forms. Our courses provide the foundations of knowledge to teach you about different wines and spirits and how to taste them, but alongside that, real tasting experience is the most important part of the journey to inspire a passion to learn more.”