As editor of Meininger’s Wine Business International, the only international wine trade magazine, Felicity Carter manages the content that gets under the eyes of the world’s industry decision makers. She reveals how she keeps her finger on the pulse of developments across the wine world and why the topic of women in the industry needs to be covered carefully.

Having started your writing career covering everything from oil and gas to fashion, what led you to settle in the world of wine?

My current job! I had always wanted to work in Europe and one day I was sent a job ad for an English speaking journalist who knew something about wine, who was prepared to move to Germany. My application went out that night.

What are your key sources of inspiration for the magazine’s content and how do you keep it relevant for a global audience?

There is no substitute for people on the ground, and we’re lucky enough to have a widespread network of correspondents. They keep me up to speed with what’s going on around the world. I also spend a lot of time reading business research from other sectors, because other industries are grappling with similar issues, and seeing how they solve problems is always enlightening.

We pursue a "reader first" policy, where I spend a lot of time thinking about what will interest our subscribers. They are very active and give a lot of feedback, which helps. 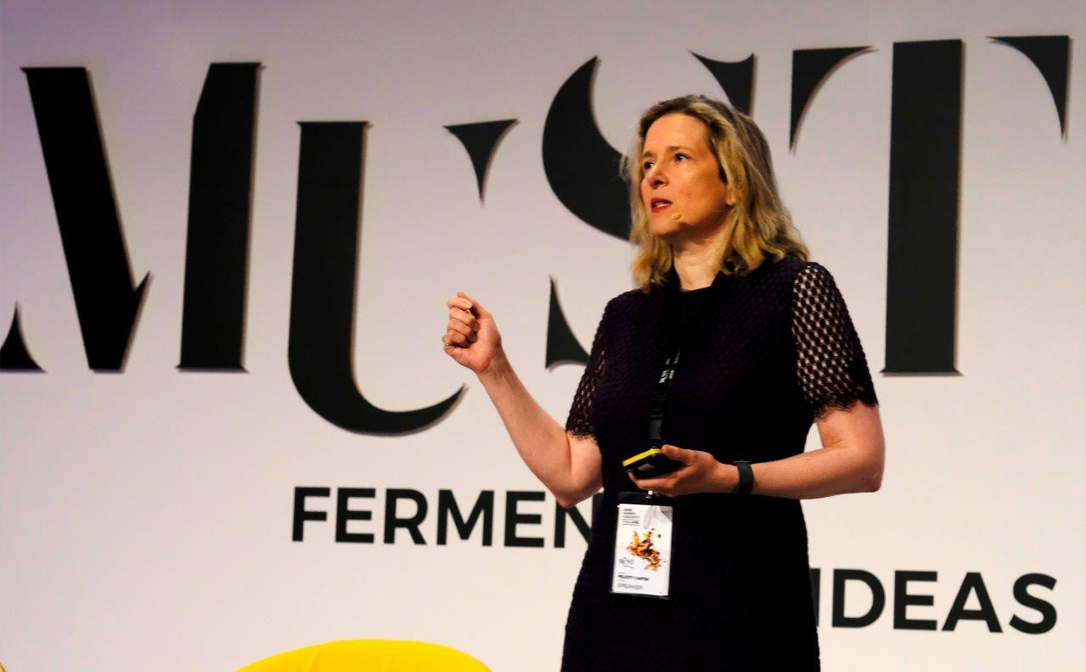 Felicity Carter speaking at MUST Wine Summit in 2017. Credit: observador.pt

Having participated in panels on the empowerment of women in wine, what do you think have been the hindrances on women’s prominence in the industry? Have you noticed an improvement in gender equality in recent years?

This is a complicated and fraught subject. I’m known for refusing to publish "women in wine" pieces, because I don’t think someone’s gender is what makes them an interesting winemaker or sommelier or whatever. Likewise, if we’re interviewing executives, I strike out questions related to "how do you manage child care as well as your job?," as I think they’re deeply sexist. As a result, I’ve met people who think I’m not interested in the position of women, when nothing could be further from the truth.

Because the wine trade is so international, it’s difficult to make any general statement about the realities of women working in wine. The British wine trade has women that are some of the most talented, notable and powerful wine people in the world. California, Australia and New Zealand have plenty of notable women winemakers. Europe has many wineries owned by women. So on the one hand, the situation looks pretty good.

But that’s not the whole story. We ran an international survey on working conditions for women in wine and after it was published, my inbox was flooded with emails from women working in Europe, who wrote hair raising and disturbing stories about the egregious sexual harassment and discrimination they experienced. One woman wrote to me that she wasn’t allowed in the winery for fear she would spoil the wine if it was a particular time of the month.

Another time, I was in a car travelling through Italy discussing the issue with the driver, and she nearly crashed the car because she was so upset about what was happening in her own company. “I will never get paid as much as the men, no matter how good a job I do,” she said.

What has really helped to improve things, though, is the realisation that women are significant wine consumers. Companies who take the market seriously now have to think a lot about women’s preferences, and so they’re deliberately employing more women to help them do that. The companies that take women consumers seriously will win – and that means not thinking of "women" as a category at all. It means thinking about fine wine drinkers, supermarket drinkers, younger consumers and older consumers with more money. Fortunately, it’s happening.

I also spend a lot of time reading business research from other sectors, because other industries are grappling with similar issues...

As an international wine judge traveling to established and developing wine regions, do you find your WSET education helps you assess wines objectively?

The WSET Systematic Approach to Tasting was a revelation to me and I embraced it wholeheartedly. Up until I did the systematic training, I had this belief that there were people who could taste and people who couldn’t. Now I know that the very best and most reliable tasters aren’t necessarily the ones with the most innate talent, but the ones who practice the most.

Q and A Writer
All Articles