A sneeze is coming – quick, reach for a Kleenex! You’ve sliced your thumb open – you need a Band-Aid, ASAP!

Tissues and plasters are some of a small number of products where a single producer has become so dominant in the space, their brand name so synonymous with the product category, that people stop referring to the product by its name altogether and adopt colloquial usage of the brand name itself to refer to the entire category.

You’re at a fancy restaurant, you’ve just finished an amazing meal, and it’s time to have a nightcap that rises to the occasion – so you order a glass of Cognac.

A fine choice, to be sure. And while all Cognac is brandy (they are often treated synonymously) did you know that not all brandy is Cognac? Brandy is an outstanding category of spirits that is made all over the world - there are also many exciting fruit brandies made from fruits other than grapes to discover. That’s where this article comes in!

How is brandy made?

In one of the introductory lessons of WSET’s Level 2 Award in Spirits, we learn that a distiller’s first job is to produce a sugary liquid from raw materials. This sugary liquid is then fermented to create alcohol, which can then be concentrated into a spirit through distillation.

When a distiller works with fruits, especially grapes, obtaining this sugary liquid only requires a few steps because ripe fruit naturally has sugar-rich, juicy flesh. (The relative simplicity of the process is one of the reasons we tend to teach fruit spirits first in our spirits qualifications.) 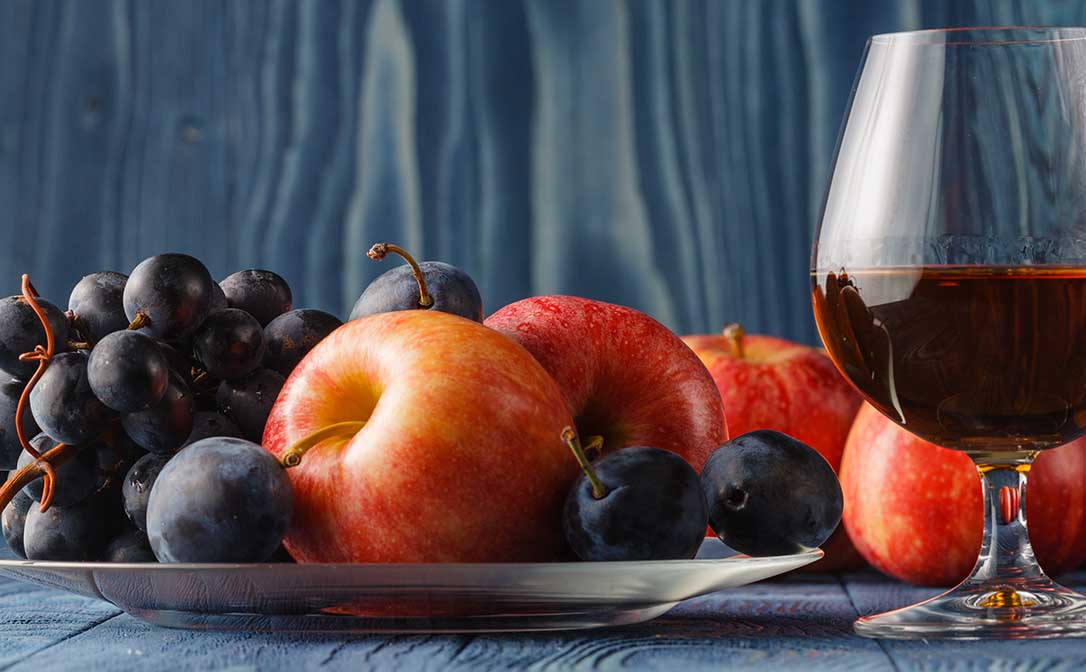 Fermenting grape juice creates wine. And, the popularity of wine as an alcoholic beverage for thousands of years meant that, at the advent of distilling, wine would have been one of the most common alcoholic beverages to be distilled into a spirit.

The Dutch called this spirit, obtained from heating wine in the distillation process, ‘brandewijn’, a shortened version of 'gebrande wijn' – literally “burned wine”. It is from this Dutch word 'brandewijn' that the English word ‘brandy’ originates.

If you’re new to brandy, it might seem daunting or confusing. It doesn’t help that the brandies you might see most frequently don’t label themselves as such. This includes some of the best-known brandies in the world - Cognac, Armagnac and Calvados - all produced in France and often seen as the global benchmark for brandy. 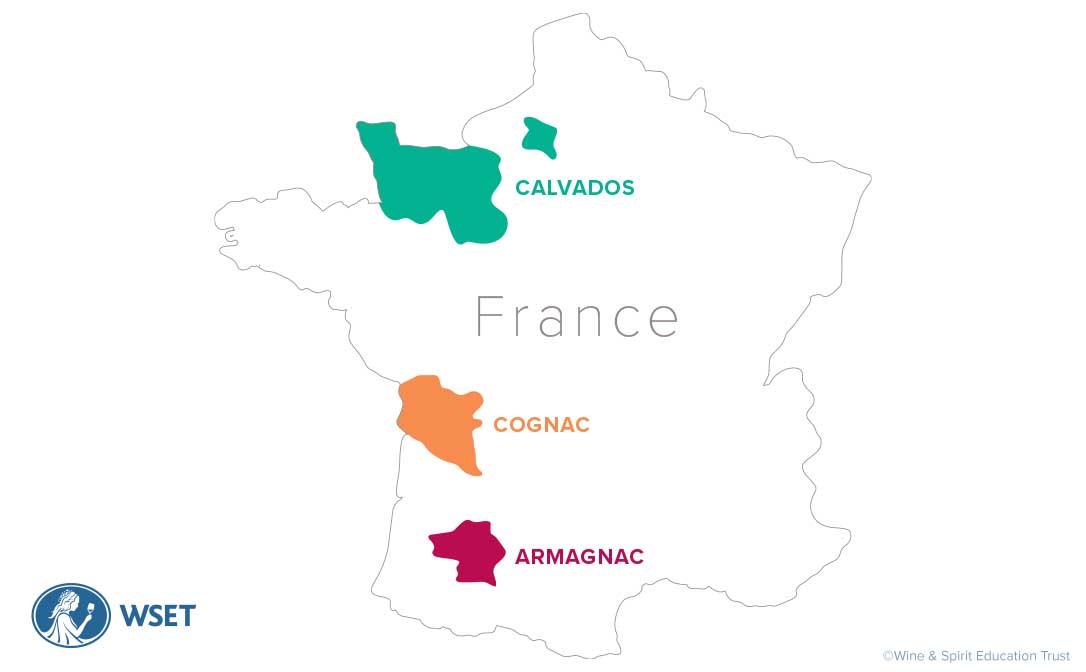 Cognac is by far the best-known brandy of all and, while there are many producers, a small number of very well-known international brands dominate. These brandies must be produced within the Cognac region, just north of Bordeaux, and matured in oak barrels. The various houses have nuances in the styles they produce, but generally young Cognacs will have light and lively fruit and floral aromas, with the influence of oak increasing in older examples, along with mature aromas and flavours of dried fruits.

Armagnac is another production area in France renowned for high-quality brandies. Unlike in Cognac, small producers tend to dominate. Differences in the way these brandies are produced generally mean Armagnacs having bolder, more complex aromas and flavours compared with Cognacs. For example, in Armagnac, brandies don’t have to be matured in oak barrels, so you’ll find clear brandies from the region with no oak aromas, emphasising their fruit and floral aromas instead.

France’s famous apple brandy, known as Calvados, is made in production regions particularly well-suited to growing apples in Normandy, northern France. Because Calvados is usually produced in very large oak vessels, oak influence is minimised and apple brandies will retain pronounced aromas of apple, even after long ageing. There are many other fruit brandies that you should seek out and taste to expand your understanding of the category.

Italy is famous for grappa - a pomace brandy made with the skins of grapes that are discarded by winemakers. The pomace from black grapes includes some alcohol. This is because black grape skins give red wines their colour and need to be included in the fermentation. Therefore, black grape pomace can be distilled directly. Typically, white grape pomace does not include alcohol as it is discarded before fermentation. However, it does still contain some sugars. By adding water, the distiller can produce a sugary liquid that can be fermented and then distilled.

Italy’s grappas are rarely matured in oak, so they showcase the varietal characteristics of the grapes used to produce them, as well as pronounced herbaceous flavours from the pomace. 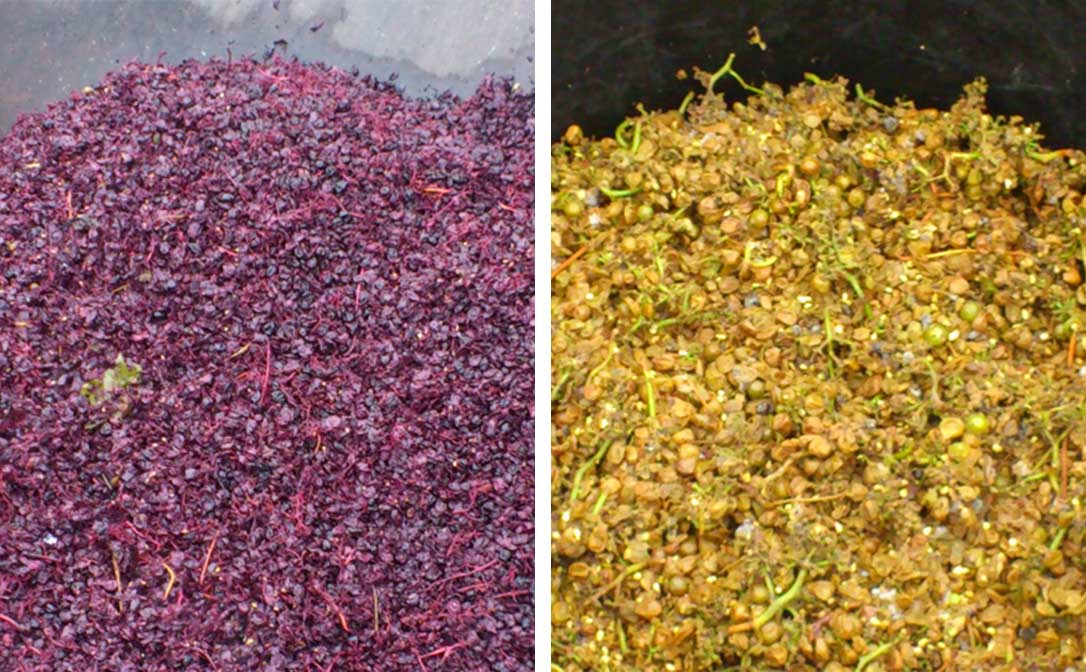 One other type of brandy, produced in Chile and Peru, is called pisco. These are pot-distilled brandies made from highly aromatic grapes, especially from the Muscat family of grape varieties. Most examples of pisco are not aged in wood so as to preserve the natural aromatics of the grapes used to produce them.

You’ve sparked my interest – how can I learn more?

If you’re feeling confident, you can start by tasting examples of the different types of brandy we discuss in this article. This way you’ll build your familiarity with the common styles. After that, you could start exploring aged versus unaged brandies and brandies of a similar style from different producers.

By exploring the brandy category, you are sure to gain an appreciation for products beyond Cognac.

Of course, the very best way to discover the exciting world of brandy is through WSET’s Level 2 Award in Spirits, available in a classroom and online. Ready to learn more? Find a course provider near you.