In part 1 of our ‘Whisky gifting 101’ blog, we covered what a whisky is and offered a brief introduction to peated whisky. In the second and final part, we discuss Irish whisky, Bourbon and whether older is always better.

If all whisky is made from grains, what is a Grain Whisky?

This is another term that often bamboozles. Rather than being distilled in traditional copper pot stills, Grain Whisky is made using a column still. This can produce a far lighter style of spirit, with an emphasis on elegant fruit aromas and vanilla and butterscotch notes from the cask. It’s worth bearing in mind that lighter spirits tend to be less characterful. So, if your loved one tends to shy away from robust spirits, then a Grain Whisky may be just the ticket. This style is harder to find on your supermarket shelf, but many specialist spirits stores have a decent selection of Grain Whiskies. Chita from Japan & Teelings Single Grain from Ireland are fine examples of this style.

If the bottle says Blended Whisky is it any good?

A Blended Whisky is a combination of Malt Whisky and Grain Whisky. There can be several of each of these spirits in a blend and some of the finest whiskies in the world are masterful marriages of dozens of whiskies from different distilleries, aged in different barrel types and of different ages. Renowned Scotch Whisky blends include Johnnie Walker, Chivas Regal, Grants and Dewars. These whiskies have a very wide price range, with expressions to suit every budget.

They do it differently in Ireland.

While Malt Whisky is traditional in Scotland, a similar but different style called Pot Still Whiskey evolved in Ireland. Made using both malted and unmalted barley, this style has a creamy mouth-feel and typically displays bright fruit aromas with a spicy finish. Classics of this style include Redbreast and Greenspot. Jameson is the best-known Irish blend, and features Pot Still Whiskey along with Grain Whiskey - while Tullamore DEW also adds Malt Whiskey to its blends. 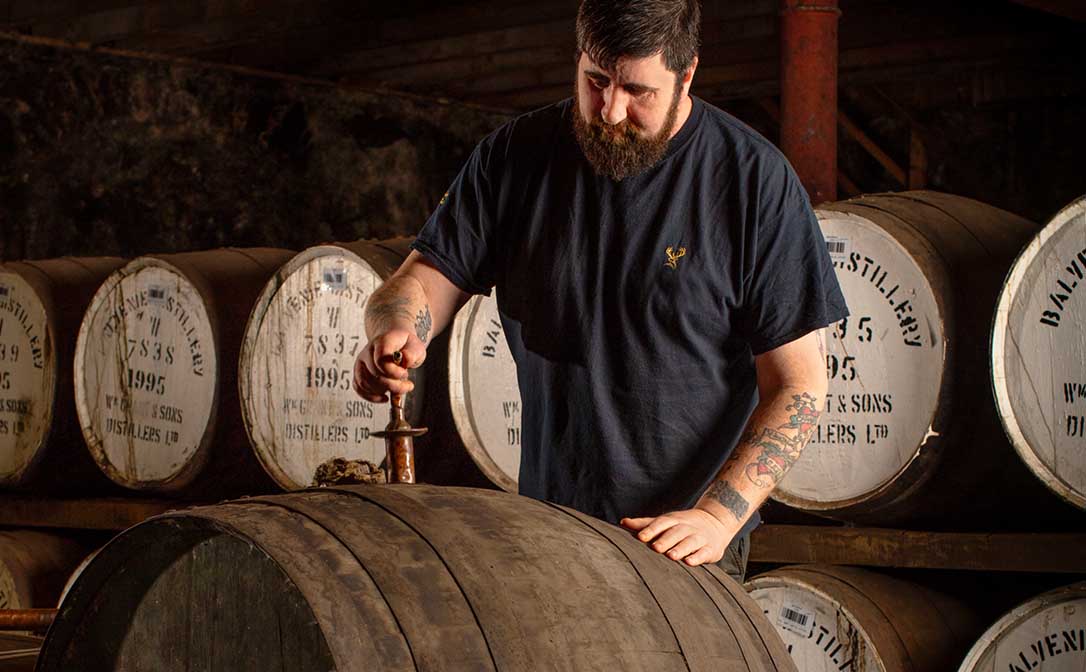 Whiskies are typically a marriage of several different casks, often of different ages. If a bottle of whisky carries an age statement, then that is the age of the youngest spirit in that bottle. So, if I were to blend a 35 year old whisky with a 5 year old whisky, the oldest permissible age statement on that label would be ‘5 Years Old’. Most well-known producers practice masterful barrel management and blending, but don’t be tempted into splashing out for a very expensive whisky purely because of an age-statement. It is also worth noting that, in hotter climates, aspects of the aging process are accelerated - so a 5 year old Indian whisky or Bourbon whiskey will typically have developed more wood-derived characteristics than a 5 year old Scottish whisky or Irish whiskey.

American whiskey is all a bit unsophisticated, right?

One of the things that comes as a surprise to many students on our courses is just how regulated American whiskey production is. Bourbon, Tennessee Whiskey, and Rye Whiskey are all produced to strict US federal guidelines that define in detail the type of grain and barrels used, as well as the technical aspect of distillation strength. The rise in the US over the past decade of brown spirits among younger drinkers has been remarkable. In particular, the distinctive corn, vanilla and caramel notes of Bourbon, and the spicy gingerbread character of Rye Whiskey, have really come into their own as great whiskeys for drinking neat or for cocktail lovers. Indeed, certain releases from W.L. Weller, Pappy Van Winkle and WhistlePig have developed a cult-like following, while many American Single Malts such as Westland are now very highly regarded globally.

What’s in the wood?

No matter where or how a whisky is distilled, the cask that it ages in will impart a whole heap of flavour to the resulting spirit. For instance, Bourbon is always aged in new charred oak barrels - which impart plenty of vanilla, coconut, and baking spice notes. Because Bourbon must be aged in a new barrel, ex-Bourbon barrels are typically shipped to other spirit producing countries such as Scotland, where the local spirit will then age for a number of years, imparting these same flavours, but with less robust impact, along with a slight residual Bourbon character. Ex-sherry casks on the other hand tend to impart fruit-cake and nutty notes. Whisky makers around the world are increasingly experimenting with different barrel types to influence their whiskies in new and innovative ways.

Never be afraid to ask.

Most specialist off-licences will have well-trained staff who will happily offer you expert guidance in your choices. And if you still can’t decide, then perhaps an appropriate gift idea would be a course in understanding spirits better, either for your friend or for you as well. WSET offers the world’s leading cross-category spirits qualifications, with courses to suit all levels.

For a gift that lasts a lifetime, visit our Where to Study page to find the right course provider for the spirits lover in your life.
With courses ranging from beginner to expert level, online and in-classroom, you’re bound to find the perfect gift.