Following his recent success achieving the Master of Wine, Tim Jackson authored the new WSET Alumni report ‘Consumer Wine Education: Should the Wine Trade Care?’ anchored on his MW research paper. As a consumer outside of the trade himself, he shares his key findings and the bottles that have inspired his catalogue on winebook.co.uk.

You completed your Master of Wine thesis on the importance and impact of consumer wine education to the trade. As someone who doesn’t work in the trade why were you interested in this topic?

There are two reasons for this. First, I am a consumer who has enjoyed and benefited from wine education. I completed WSET Level 3 Award in Wines in 2004 then the WSET Diploma between 2007 and 2009, graduating in 2010. I have since gone through the MW study programme, finishing last year.

Those courses expanded my wine horizons, from the magic of Madeira to the scintillating new wave of South African wines. If wine education could have that effect on me, I was fascinated to learn what effect that could have on others, and from a strategic perspective, how many ‘others’ are there, that could change the game for the UK wine industry?

Second, I have done a fair amount of consumer wine teaching, for corporate events and suchlike. Through that, I have seen how a little knowledge can have a powerful effect and I enjoy bringing people those moments of enlightenment, for example introducing fortified wines to a group of 20-something media folks and having everyone find something they loved, and at least one person loving every wine.

What was the most interesting outcome of your research?

The most significant element was quantifying the impact on consumer behaviour of doing a course. If you study for at least 8 hours (equivalent to 1 day), your spend on a bottle of wine goes up +12%. Moreover, that number rises for every 8 hours you study. This is because consumers with knowledge have the confidence to act on it and take the ‘risk’ of that higher priced wine – which they then come to love.

Fascinatingly, this +12% almost identically replicates a different study run in Quebec, which showed a +12.7% uplift in wine spend after consumers had done a 5 week evening course (around 10 hours of tuition).

How do balance your work in wine alongside your career in financial services?

When you are passionate about something, as I am about wine, it’s hard to define it as ‘work’! It is therefore easier to fit it around your working life, as you’re more willing to put your private time to it. That said, before passing the MW Theory exam in 2015, I did need to work part-time for a couple of months, to make sure I was well-enough prepared.

As a Marketing Director, many of the principles of marketing in a financial services context are the same as for wine, which helped with preparing for business of wine modules – whether in the WSET Diploma or at MW level.

More specifically though, I’m certainly better-placed than most in my sector to help my sales teams choose great value bottles of wine for their key accounts when it comes to ‘thank you’ gifts at the end of the year!

The most surprising outcome [of my thesis] was the number of people interested in doing a [wine] course. That’s 6-7,000,000 in the UK.

You keep a catalogue with labels and notes of wines that you’ve drunk over the years. What was the bottle that spurred you to start your collection and which label is the most interesting to you?

The first label in my first wine book, from around 1998, is St Joseph Grand Pompée 1996 from Paul Jaboulet Aîné, but I can’t say that was the inspiration. My parents had held onto a couple of labels some years before, one of which was a Beerenauslese Eiswein, so I guess that could have sparked the notion.

Ultimately though, as I was getting more deeply interested in wine, following 3 or 4 summers’ visits to different regions in France, it just seemed like a good way to remember what interesting bottles I had drunk (and when, why and what I thought of them).

Amongst the 20 years’ worth of labels I now have across more than 6 books there are a few that are particularly memorable. One early one is a Bonny Doon wine, from an eccentric Rhone Ranger winemaker, Randal Grahm. I like the surreal paintings of Magritte, and the label is a pastiche of one of his famous works, simply entitled “Ceci n’est pas un carignan”.

I’ve also begun getting winemakers to sign their own labels, so getting Kiwi actor Sam Neill (Jurassic Park, Peaky Blinders…) to autograph his Two Paddocks was pretty cool. But I’m gradually transferring these online to winebook.co.uk so readers can choose for themselves! 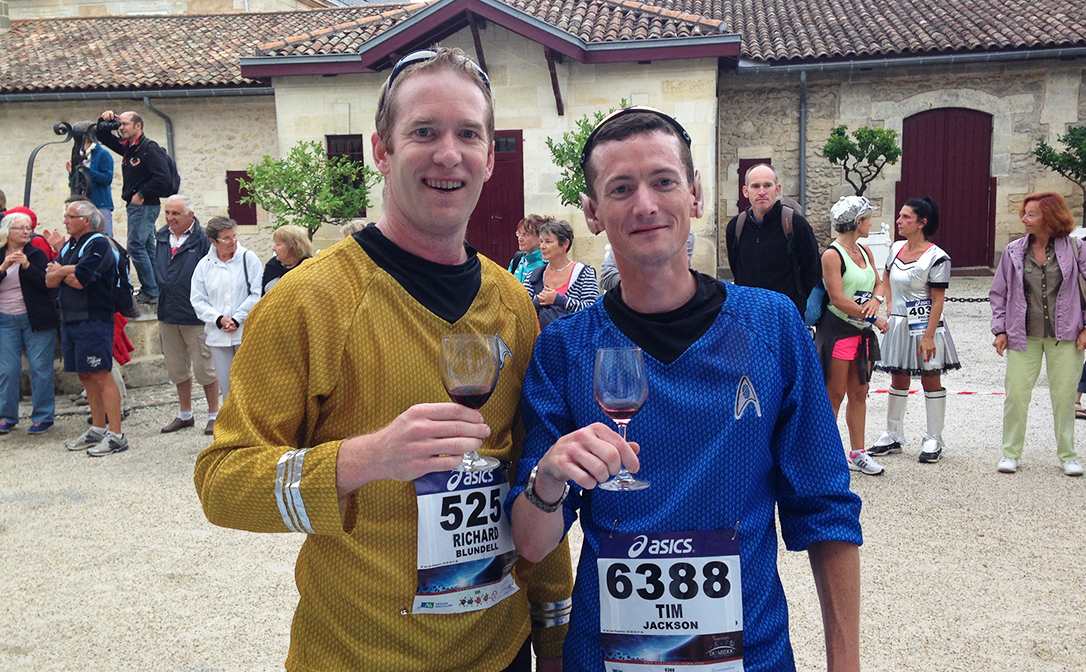 Beyond wine, over the years you’ve been an active cyclist and marathon runner. What has been the most incredible place that you have experienced on these excursions?

The first mountain I ever did in 2009 was Mont Ventoux, and the first few kilometres pass through scrubby Grenache bush vines of that appellation. Three of the most memorable other places are also vineyards on volcanic islands. Climbing El Teide on Tenerife from the north side passes through the Valle de Orotava with its extraordinary trenzado-trained vines. Around Lanzarote, you see the pock-marked black gravel vineyards with malvazia huddling in the bottom of walled pits. But on Madeira you just get really, really steep roads!

Most recently, between Christmas and New Year, I had the pleasure of hiring a bike just to ride the Franschhoek Pass. South Africa has stunning vineyards and Franschhoek is certainly one of the jewels; the view was awesome.

Marathons I’ve mostly run in cities like Berlin. But the most incredible marathon, that everyone should do, is the Marathon du Médoc, through the great vineyards of the Bordeaux left bank. Where else can you run amongst vines, taste Chateaux Lafite and Pontet-Canet, whilst dressed as Mr Spock?!

Alumni Q and A
All Articles