The rise of the urban winery

Rolling hills, manicured vines and expansive cellars are likely the first images we conjure when thinking about visiting a winery, far away from public transport, tower blocks and street lights. Yet an increasing number of wineries are finding their homes within the confines of city blocks.

Dubbed "urban wineries," these properties are popping up in major metropolitan areas - from New York City to Sydney. By way of definition, an urban winery is a relatively new phenomenon whereby producers choose to locate winemaking facilities in an urban environment, rather than in the more traditional, rural locations.

Winemaking is not the first of the drinks industry to venture into city locations; this model has been tried and tested by both breweries and distilleries. However, the close historical connection between winemaking and terroir is a differentiating factor, and urban wineries are challenging this perception.

But with high start-up costs, including buildings, logistics and employees - not to mention that wine is an industry which can struggle for cash-flow - why are entrepreneurs willing to take those risks associated with starting an urban winery?

It starts with passion

While working in Bordeaux as a winemaker for Chateau de Lagarde, Alex Retief was struck by how “everyone in Bordeaux worked in wine, it was very much a part of daily life.” Upon moving back home to Australia, his passion for the quality wines of New South Wales was a catalyst for the development of his Urban Winery Sydney.

At the time, Alex says, “I didn’t realise what I was creating was an urban winery, I really just wanted to build a winery in the city.” His interest was in finding a way to “break down the barriers” of wine by bringing production to the consumer and Sydney seemed like a good place for this. Urban Winery Sydney now comprises a full functioning open winery, a cellar door and wine bar, and an event space.

Similarly, New York’s Red Hook Winery proprietors were looking to draw attention to local viticulture. “The business model was not to build an urban winery...we didn’t think of it like that,” says Christopher Nicholson, one of the winemakers since the Brooklyn project took shape in 2008. The aim, explains Christopher, was always to highlight the quality of wines deriving from North Fork Long Island and Finger Lakes. One of three winemakers at Red Hook, Christopher says they each boast various viticulture backgrounds but were united in wanting to “bring whatever knowledge we had to the table, and work and share it with other winemakers and consumers.”

London Cru was the city’s first winery, opened just six years ago, and is now firmly canonised, having won several IWC awards and other critical acclaim. The brainchild of this Fulham winery is Cliff Roberson, owner of Roberson Wines, who has accrued over 50 years in the trade.

Lindsey Marden, Business Development Manager of London Cru, explains that Cliff had watched the success for such ventures in the US and believed there was opportunity in London. Lindsey was in product development in the city prior to joining Roberson just over two years ago and has undergone what she calls a “crash course” in winemaking, having built up her knowledge through WSET Level 2 Award in Wines & Spirits. She observes that beer and spirit ventures have paved the way for wine and that “the consumer seems to enjoy [both quality and local] products. They can visit us, they can feel engaged with the product. They don’t have to rack up air miles, so from an environmental perspective, that is also a draw.” 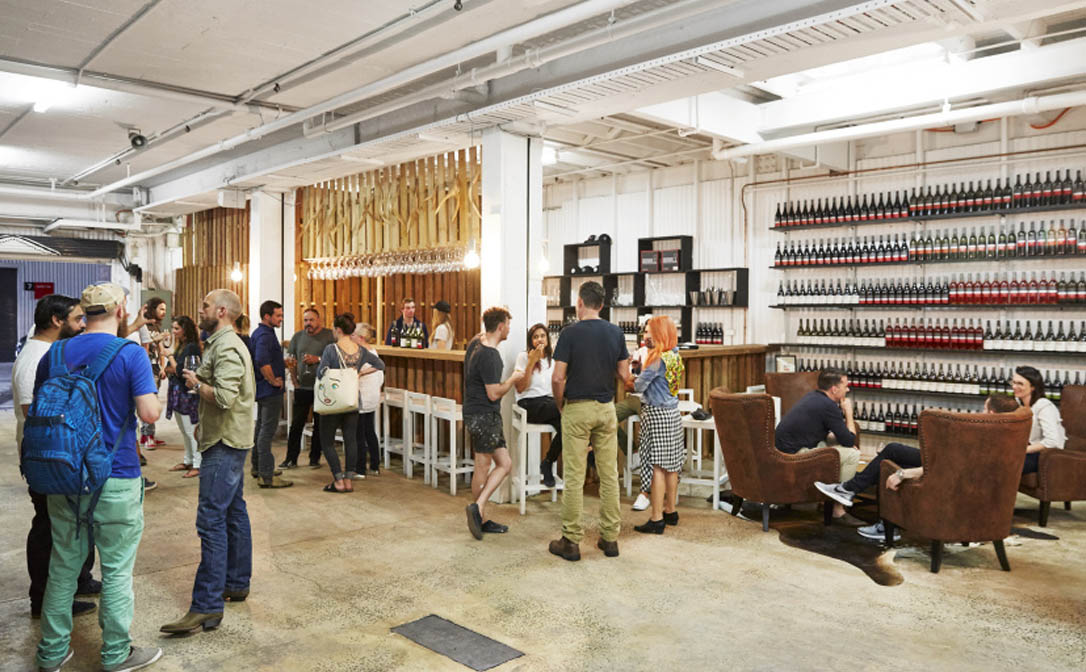 Key to the success of any winery, is quality of fruit. Purchasing grapes, says Alex, is a well-established model in Australia. “It is easy to buy great quality fruit on contract each year - you don’t have to be "large capacity" in order to do so.” Under his label A. Retief, which remains separate from Urban Winery Sydney, Alex creates around nine wines each year, most of which are single varietal, although he does experiment with blends as well. Keen on showing off the quality of wines of New South Wales, not only does he pour his own wines at Urban Winery Sydney, but he pours several "guest wines" from the region, served alongside local cheeses and charcuterie.

Having sourced fruit from Europe since 2013, the 2018 harvest will be London Cru’s first in which all fruit derives from the UK. “We have been watching with great interest the buoyancy of the English wine market and though it was very important to be part of the UK community,” says Lindsey. Alongside Chardonnay and Bacchus, London Cru will be adding an English Pinot Noir to the range this year.

Similarly to English viticulture, “the youth of New York's viticulture is a challenge but an exciting one at that”, says Christopher. In 2008, he and the Red Hook team drove to North Fork Long Island and went knocking door to door to meet farmers and sourcing quality fruit. From 2012, they have homed in on a few properties, all of which farm in different ways, but all of which have quality as a distinguishing factor. Red Hook’s three winemakers, then take a third of each grape variety and vinify separately, with their own name on each label. “We are super collegial; the viticulture is unifying, the oenology is diversifying,” explains Christopher.

While the winery and vineyard will remain intrinsically linked, urban wineries are broadening the way in which consumers can engage with product.

Bringing the community together

The symbiotic relationship between the winery and the community has been integral to Red Hook Wineries success. Christopher says they have been very fortunate to have the encouragement from the landlord, who was keen to see diversity grow in the area which has historically been a dangerous part of Brooklyn. The community, Christopher explains, has been very welcoming - even during the early days when Red Hook was such an anomaly.

Urban wineries also allow students studying wine courses such as those from the Wine & Spirit Education Trust (WSET) to have access to wineries without leaving the city. Raquel Alvarez, who is a consultant and alumni of Madrid’s La Matritense and holder of the WSET Level 3 Award in Wines, began at La Matritense for practical reasons, as it was the only place she could learn about the different stages of winemaking without having to travel far.

Based in Madrid, the grapes are harvested from vineyards just on the outskirts of the city. While some of the wine is sold in very limited quantities to local shops, the majority is sold at the Matritense wine bar, above the winery. La Matritense, Spain's only urban winery, explains Raquel, provides a space where the community can “enjoy the wines at the bar, learn more about international wine at the wine school or learn how to make wine at the winery.”

Alex who recently relocated Urban Winery Sydney to the Entertainment Quarter of the city says that naively, he did not realise that events would be such a big opportunity. During harvest, he opens as much as he can of the winery to encourage visitors to be a part of the process. This includes a blending tour, in which guests can blend their own wine, under their own label.

For London Cru, which is a stone’s throw away from West Brompton Underground, being close to public transport was key, as it provides easy access for people who live in or are visiting London. They offer similar experiences and events spaces to that of Urban Winery Sydney; “the aim is always to get visitors to see a working winery, taste the wine and see how it is made,” explains Lindsey.

In addition to sharing the winemaking experience, London Cru is encouraging the viticulture and educational side of wine as well; they invite volunteers to pick during the harvest and are now qualified to teach WSET levels 1, 2 and 3 Awards in wine. 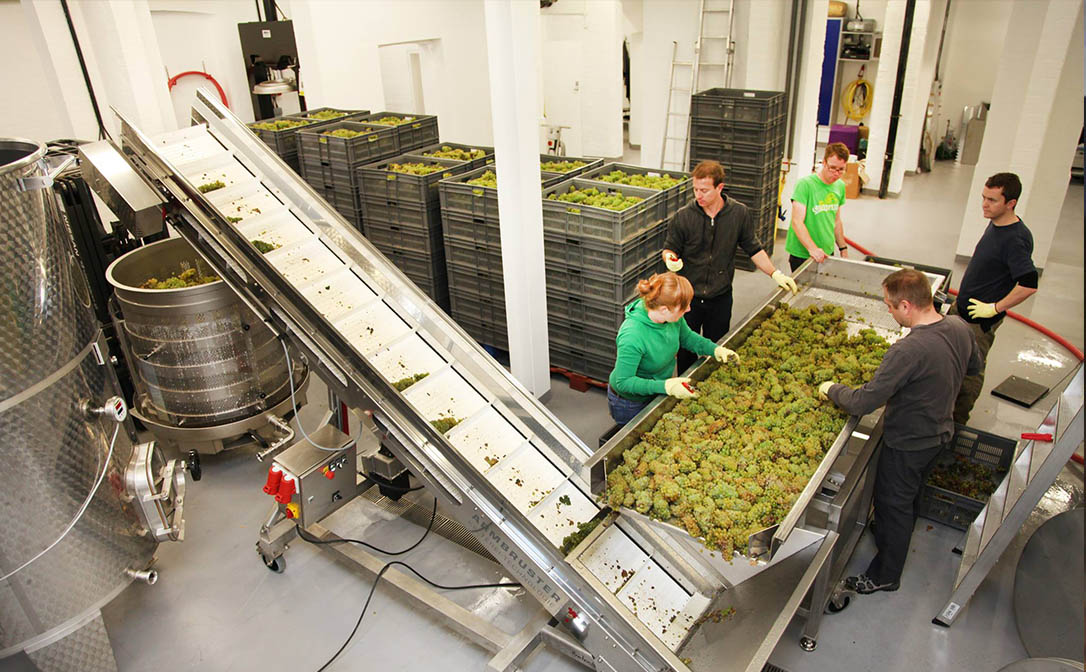 Passion, of course, is just part of the foundation for success. Raquel explains that as an investment, an urban winery “requires substantial initial start-up capital and then several years of minimal revenue while the wine is being produced,” adding, “only then can you look forward to generating any profit.” Lindsey agrees that start-up costs are high on account of a city-centre location but that “wine is never a cheap business.” She adds, “Regardless of location - urban winery or not - the industry requires time, investment and hard work.”

There can be additional restrictions to be aware of in an urban environment. “It was not just council restrictions, but the licence to retail and to sell,” explains Alex. Being in such a residential area also has some unique frustrations. Getting the trucks of fruit in and out of the city, for example, was an early obstacle he faced: “We would have wanted them here arriving with fruit at 5am, but this would have upset the neighbours” says Alex, who brings his fruits in two hours later instead.

Raquel adds that there are some administrative challenges to consider as “the government and local authorities have recently started to apply stricter health and safety rules making it more challenging for urban wineries to carry out all the stages of the wine making process in an urban setting.”

Christopher affectionately comments on his friend Mark Snyder’s decision to fund the Brooklyn-based start-up, which perhaps sums up the crux of urban wineries: “[Red Hook is] a ridiculous project from a business perspective… but it is, after all, a labour of love.”

What seems clear is that the urban winery is no longer a phenomenon, the model is now very much a permanent fixture within the industry. Acting as a "gateway," these businesses bring wine to the front door of the consumer - especially for a younger generation who are increasingly living in cities, who may be otherwise intimidated by wine but who are becoming more environmentally conscious and are interested in supporting local production and business.

While the winery and vineyard will remain intrinsically linked, urban wineries are broadening the way in which consumers can engage with product. By offering consumers the opportunity to experience and connect with the industry, there seems to be great potential in the coming years.

Hannah van Susteren DipWSET manages PR, marketing and events for Atlas Fine Wines. Originally from Vermont USA, she moved to the UK in 2009 and has rapidly built her wine knowledge since. She is also co-founder of Women in Wine LDN with fellow two fellow WSET Diploma graduates.