The wines of India: Another country on the world map of wine

USP, or unique selling point, has never been more important than in today’s fiercely competitive global wine market. New or unknown regions, native grape varieties and obscure wine styles are increasingly chosen to differentiate a company’s offering. Yet, the mention of India as a wine-producing country never fails to surprise even the savvy wine professional. Peter Csizmadia-Honigh DipWSET, author of The Wines of India, a Concise Guide takes a closer look at India’s wines below. 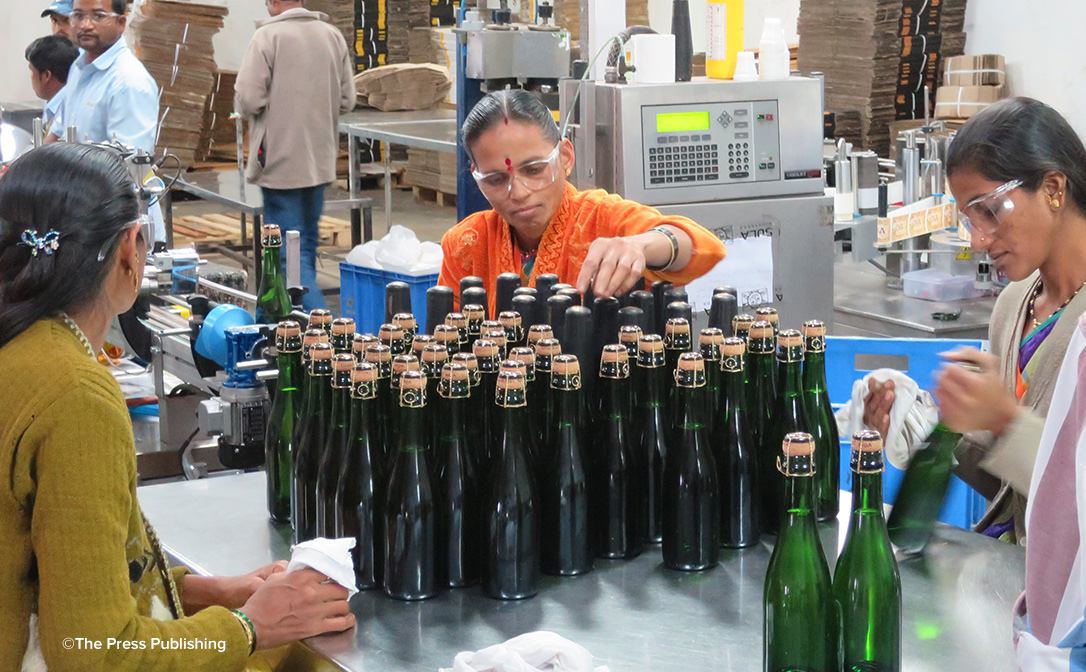 Historical and literary sources may trace wine in India back to the 13th century bce, but the origins of the contemporary Indian wine industry lie in the early 1980s when two pioneering industrialists and businessmen, Shymarao Chowgule and Kanwal Grover, set themselves the task of producing their own wines on Indian soil. The entry of Sula Vineyards, the largest Indian wine producer today, in the market in 2000 symbolised the optimism of the times. Maharashtra was the first state to introduce a wine policy in India in 2001, leading to a large number of new wineries being established. Three other states introduced wine policies: Madhya Pradesh and Tamil Nadu in 2006, and Karnataka in 2007.

The financial crisis of 2007-2008 forced many producers into bankruptcy, including the liquidation of Chowgule’s Chateau Indage, the largest winery at the time and best known for its Omar Khayyam sparkling wine. From 2007 onwards new serious winery projects commenced, including Alpine Wineries, Fratelli Wines, Charosa Winery, Four Seasons, KRSMA Estates, Vallonné Vineyards and SDU Winery. Multinational drinks giants too started to take an interest and set up shop in India: Pernod Ricard, Diageo and Moët Hennessy. Financial investors moved in despite the apparent challenges faced by the nascent Indian wine industry. 2009 saw the establishment of the Indian Grape Processing Board and India joined the OIV in 2011.

The Indian subcontinent is a vast stretch of land in South-East Asia with varied climatic conditions from Jammu and Kashmir in the north to Tamil Nadu and Kerala in the south. The majority of wine production, however, is concentrated in two south Indian states: Maharashtra and Karnataka. As such, most of the 2,500 hectares (6,178 acres) of vineyards, circa 2% of Bordeaux’s, fall within the subtropical climate, with two distinct seasons: the wet summer months and the cooler dry winter period.

The south-westerly monsoon brings the overwhelming bulk of the annual precipitation between May and September, accompanied by high temperatures often in excess of 30°C and, in some areas, rising close to 50°C. During winter there is normally no rain at all and temperatures fluctuate between 35°C at daytime and 15°C during the night, providing for a much welcome diurnal temperature variation.

This has two implications in the vineyard. One is the complete lack of dormancy for the vines, which restart their growing cycle as soon as they have been pruned after harvest. Consequently, quality-conscious producers prune twice a year: after harvest in May and right after the monsoon, in the period from early August to late September before the new growing season starts. The other implication is the reverse cycle of temperatures during the winter period: temperatures decrease from the start of the growing season, reaching their lowest in December, after which they are set to rise again as the grapes are in the final stage of ripening. 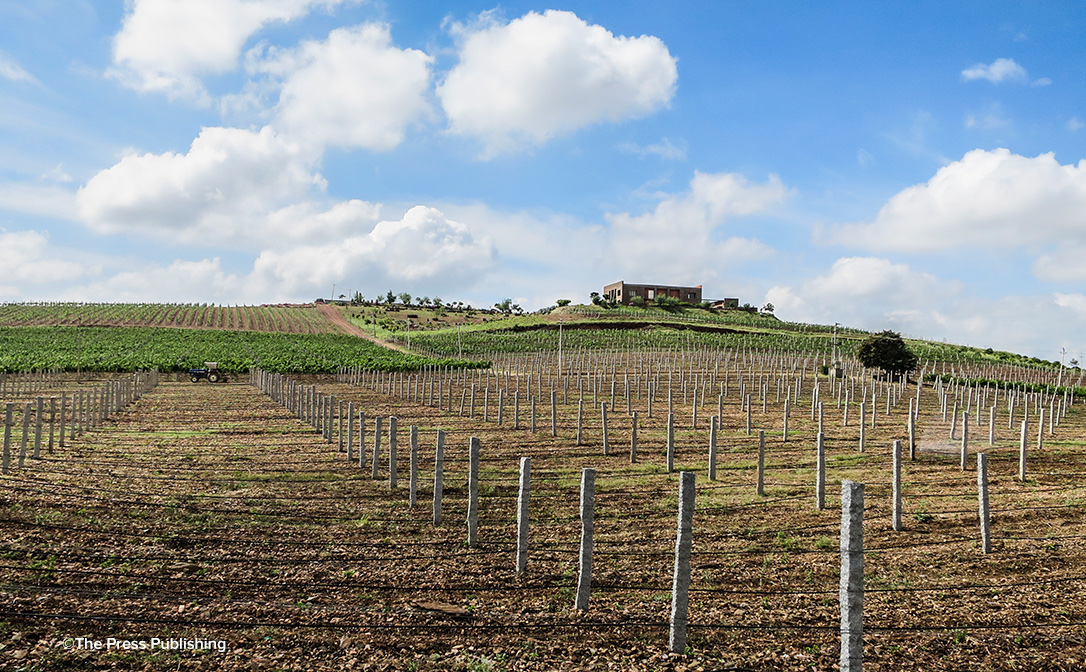 Regional variation is, however, detectable. The distance from the Equator in the south and the Arabian Sea in the west influences the amount of rainfall. For example, in Nashik, one of India’s eight wine regions and home to most of the commercially significant producers, the Western Ghats break the monsoon clouds first, depositing 3,500mm rainfall in the Igatpuri area, whilst the more inland sub-regions barely receive 500mm. Nashik, the wine capital of India, is also a centre for wine tourism thanks to its favourable location: it is only 190 kilometres, or a 3.5 hour’s drive, north-east of metropolitan Mumbai and is one of the four centres for the Kumbh Mela, a mass pilgrimage that is held every twelfth year, with Hindus congregating to cleanse themselves of sin in the river.

Altitude exerts its influence both on average temperatures and the extent of the diurnal temperature variation. Bangalore and the South, a wine region located at an average altitude of 950m in the state of Karnataka, enjoys more moderate summer temperatures than Nashik, lying at an altitude of 600m. Consequently, the difference between day and night temperatures also diminishes somewhat, impacting on the ripening of grapes.

Though Bangalore Blue and Bangalore purple are native Indian grapes, they are V vinifera and V labrusca hybrids, giving them a rather foxy taste and making them suitable only for sub-entry-level wine.

The four most significant varieties in terms of quantity produced are Sauvignon Blanc, Chenin Blanc, Cabernet Sauvignon and Shiraz. This may partly be explained by the influence of foreign consultants, such as Michel Rolland from Bordeaux, but also because of the styles they can be produced in. The versatility of Chenin Blanc with regards to the amount of residual sugar suits the Indian palate as does the fruit-forward character of the Cabernet-Shiraz blend, regarded as the classic red blend of India with ripe fruits and plush tannins.

The rest of the grapes grown in India are classified into three groups based on their origin: French, Italian and other varieties. These include Viognier and Malbec, both showing great potential, and Chardonnay and Pinot Noir, both struggling to yield commercially viable quantities even though Chardonnay is being increasingly produced to good results. Among the Italian varieties Sangiovese is becoming more widely spread, whilst other varieties include Riesling and Tempranillo.

Stylistically the Indian and Western styles of wines are differentiated. The former includes constantly off-dry wines: suiting the spicy nature of Indian cooking; Indian port: a problematic category for naming and quality reasons, but quenching the thirst of the low-income consumer for sweetness and alcohol; wine coolers: designed to convert beer drinkers; and sub-entry-level wines: technically maybe impeccable but completely unsuitable for the Western palate.

Among the Western styles the range spreads from dry still wines, via blush and sparkling to sweet, late-harvest, vin de passerillage and santo. Premium wines are often barrel aged, with American oak possibly being more dominant, but the use of French oak is fairly common too. There is a growing thirst among Indians for bottle-fermented sparkling wine, which is typically made from Chenin Blanc or Shiraz for the rosé. These Western style wines earn an increasing number of accolades at international wine competitions and are the ones to look out for if you wish to get a taste of Indian wines.