Viognier is probably native to the small Condrieu appellation, just south of Côte Rôtie in France’s northern Rhône region. Syrah is the predominant grape variety in the area; however, in the seven communes that make up Condrieu AOC and its enclave Château-Grillet AOC, there have always been tiny plantings of Viognier. Here it can produce highly distinctive, aromatic, full-bodied wines with low acidity.

As recently as 50 years ago, there appeared to be little commercial prospect for these wines. The vineyards are on steep slopes that often need terracing and yields are low. The care of the remaining vines was left to local growers whose primary income was from the much more lucrative cherries, plums and apricots that they could sell in Paris markets. As a result, the Condrieu vineyards – and therefore total world plantings – fell to less than 10 hectares (25 acres) in the 1960s. 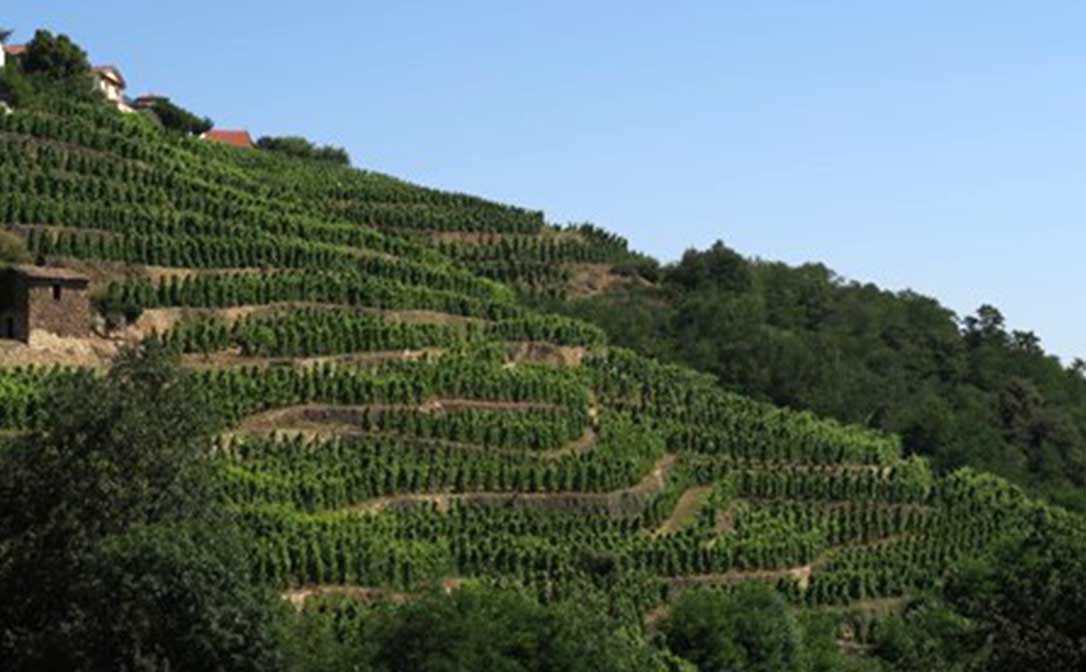 By contrast, today, Viognier is planted in many vine-growing countries of the world. Kym Anderson has charted its increased plantings over recent decades. By the year 2000, it had been planted in over 3,000 hectares, rising dramatically to 11,400 in 2010 and then to 16,000 in 2016. As such, it has just arrived in the top 50 most planted varieties in the world. That is quite an increase for a variety that was only known locally 50 years ago.

The Viognier story is one of local revival and foreign enterprise. Georges Vernay of the domaine of the same name is credited with Viognier’s local revival in Condrieu. It has now been widely planted in southern France, especially the Languedoc. Josh Jensen (Calera) in California and Peter Wall (Yalumba) in Australia were the pioneers in other countries. Today there are substantial plantings in France (just over half of the world’s plantings), followed by Italy, the USA, Chile, S. Africa, Argentina and Australia.

The wines are medium lemon in colour with pronounced aromas and flavours of honeysuckle, apricot and peach, medium to high alcohol and low acidity. The wines range from fairly simple, fruity wines that are inexpensive and widely available in supermarkets to wines of high complexity that are super-premium in price, treasured by wine enthusiasts and collectors. These styles and prices vary depending on where the variety is grown, the yields produced, and how it is made.
Viognier can also be used in varietal white blends where it contributes aromas and body to the final wine. Up to 20 per cent of Viognier is allowed in some northern Rhône red wines that are otherwise made with Syrah, most famously in Côte Rôtie. In this use, it adds to the aromatic complexity of the final red wine. While most northern Rhône Syrahs are today made from 100 per cent of that variety, Syrah-Viognier blends have also had a following around the world, especially in Australia.

To learn more about the characteristics of common wine grapes enrol on the WSET Level 1 Award in Wines.

Viognier is an early budding variety, making it prone to spring frosts, regrettably an increasingly common occurrence in European vineyards. It is commonly grown on trellises or, on the steep slopes of Condrieu, on individual poles to prevent wind damage. Historically, one of its disadvantages was its low and unpredictable yields due to poor flowering and fruit set, thus reducing returns for the grower. However, yields have improved with better clones and planting on less demanding sites, such as in the Languedoc. The picking date at harvest must be judged accurately as the fruit needs to be fully ripe to have its typical pronounced aromas. However, if left too long on the vine, Viognier loses both flavour and acidity. This can result in overly alcoholic and unbalanced wines.

Due to its relatively high levels of sugar, fermenting Viognier from Condrieu to make a dry wine was difficult, so in the past it was often made as an off-dry wine. However, today Viognier is overwhelmingly made as a dry wine.

The main choice in the winery now is whether to age it in stainless steel or to age it in new or older oak barrels. Ageing in stainless steel preserves the full intensity of primary fruit flavours. Ageing the wine in oak barrels will add additional layers of vanilla and sweet spice to the wine, using older barrels can produce a more restrained style.

The volume of Viognier that is grown and sold is unlikely ever to rival popular varieties such as Chardonnay or Sauvignon Blanc. However, Viognier’s ability to thrive in relatively warm grape growing climates and its combination of floral and ripe stone fruit, with low acidity and a full body, offers something distinctive in the range of the white wines of the world.

If you’re keen to learn more, discover the style and quality of wines made from 22 grape varieties produced in over 70 regions around the world. Click here to find out more about the Level 2 Award in Wines.

Sources:
John Livingstone-Learmouth, The wines of the Northern Rhône, 2005
Kym Anderson and Signe Nelgen, Which Winegrape Varieties are Grown Where? (Revised Edition, 2020, p. 107 and p. 327, available as a free download): https://economics.adelaide.edu.au/wine-economics/ua/media/27/winegrapes-revised-ebook-0920.pdf