Grenache or Garnacha? One variety or four varieties? Spanish or Italian origin? Anonymous blending grape or rising star? Is the total area planted dropping steeply just at the point the grape's reputation is rising?

The questions about this variety may seem endless, and the variety's fortunes are full of paradoxes. However, what is not in doubt is that it can produce very attractive wines at a range of price points and in a number of styles.

The reason for the variety's relative anonymity is that, until recently, it was frequently hidden away in blends. Despite being initially widely planted in Spain, France and parts of Italy, its name rarely appeared on a label. Rather it was an important part of the blend or even sole variety in wines as diverse as Châteauneuf-du-Pape, Priorat, Rioja, Provencal rosé and Sardinian Cannonau or indeed in the simplest red and rosé wines, sold without the name of an appellation or variety. 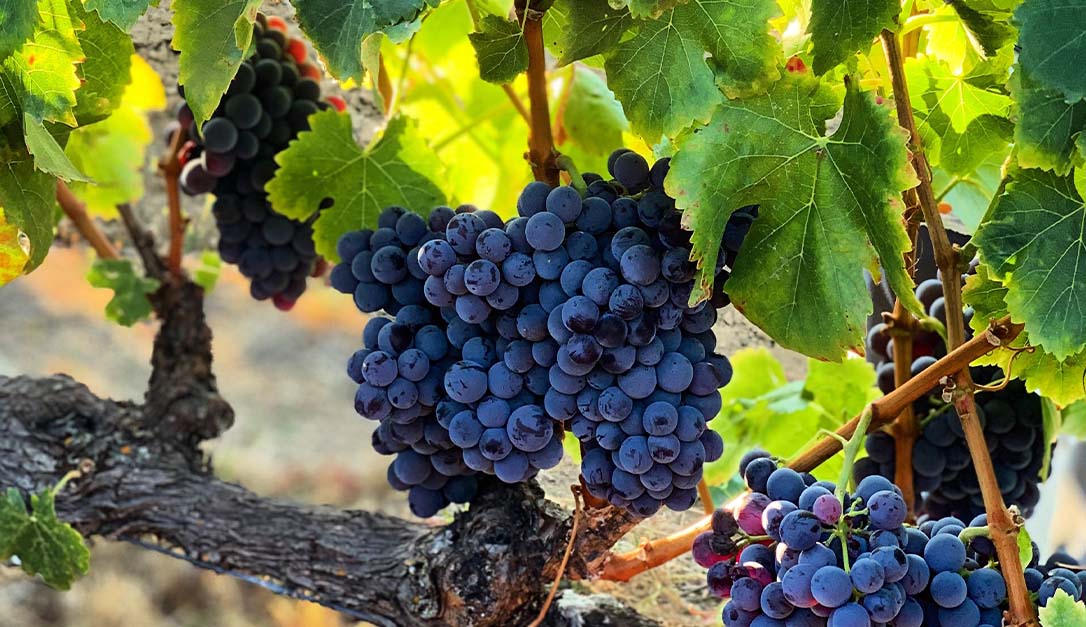 What's in a name?

The variety is commonly referred to simply as Grenache, no doubt due to the standing of France in the world of wine and the fact that France has the most plantings in the world.

But we should really call the grape variety Garnacha, as it almost certainly originates in Spain.

The colours of the grape

When we discuss this grape variety, we usually have Garnacha Tinta in mind - the black version of the grape. But there are also white, pink or grey mutations of the variety and even a mutation with distinctive furry undersides to the leaves. This is because this grape variety is very old and has undergone many mutations, some of which are stable.

The main mutations have resulted in:

These translate to Grenache Blanc, Grenache Gris and Lledoner Pelut in French. However, scientists tell us that all, including 'G' Tinta, have the same DNA profile.

From the point of view of hectares planted, 'G' Tinta is by far the most important. At 150,000 hectares, the black variety accounts for 94 per cent of global plantings. As it is so dominant, we will now concentrate on this form of the grape. 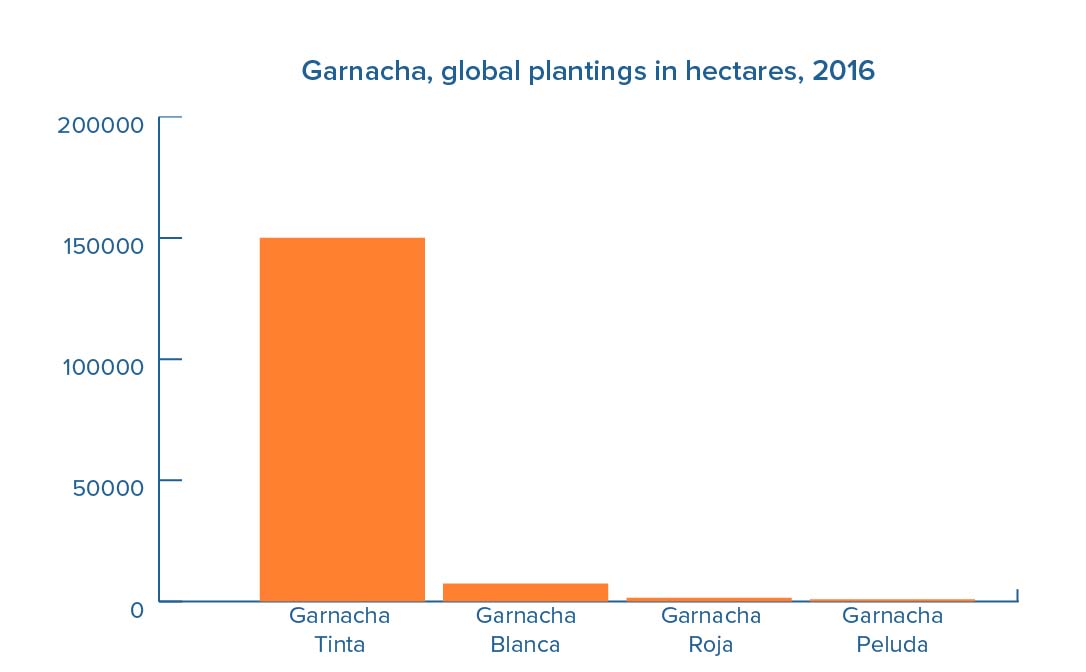 The two leading contenders for the origin of this grape are Spain and Italy, more specifically Sardinia, and there is a good reason why these two countries are both strong candidates with little seemingly to choose between them.

Sardinia, where most plantings are to be found in Italy, was under the rule of Aragon (an early modern kingdom on the Iberian Peninsula) from 1297–1713. This increased the possibility of grape varieties being transported from one region to the other.

Although the similarity of the common word Vernaccia to Garnacha supports an Italian heritage, there is documentary support for either origin as the variety is mentioned in both regions in the sixteenth century.

So, if we were guided by the historical record, this variety could have originated from either location. However, as Jose Vouillamoz argues in Wine Grapes (the standard authority on the origins of varieties), in terms of the evidence from genetics, it is clear that it is far more likely to have originated in Spain:

The one remaining puzzle to its origin is that no parent-offspring relationship has been established with other varieties. Nonetheless, it is much more likely that the variety is of Spanish origin hence the preference for calling it Garnacha.

Where is it is grown?

As you can see in the chart below, which includes the seven countries with more than 1,000 hectares planted, France and Spain account for the vast majority of plantings - nearly 90 per cent of the world total. While a handful of American and Australian Grenache wines and blends have received critical praise, France and Spain still dominate in terms of volume. 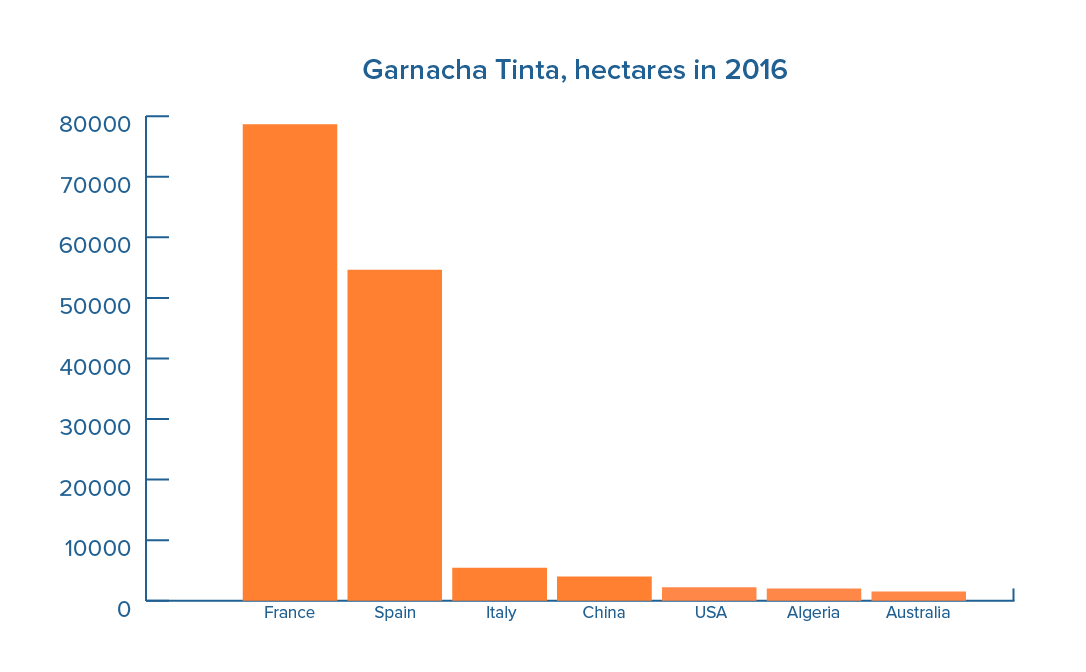 Within France, Grenache is planted principally in the southern Rhône, Provence, Languedoc and Roussillon. In Spain, the plantings are much more widespread, with the most extensive plantings in the Castilla–La Mancha region, the Aragón region of inland north-east Spain (in denominations such as Cariñena, Campo de Borja and Calatayud), in Rioja (especially Rioja Oriental) and Navarra.

In both countries, there are marked differences between the quality and price of high-prestige appellations (e.g. Châteauneuf-du-Pape in France) and appellations that produce high volumes of wine at lower prices (e.g. Côtes du Rhône).

Keen to take your wine knowledge and tasting skills to the next level? With the WSET Level 3 Award in Wines, you’ll gain a detailed understanding of grape-growing and winemaking, learn to assess wines accurately and use your understanding to confidently explain wine style and quality.

The Grenache paradox continues if you look at what has happened to plantings recently. In this century, on a worldwide scale, plantings have fallen significantly. In 2000 it was the second most planted variety globally, but by 2016 it had dropped to seventh, having been overtaken by Cabernet Sauvignon, Merlot, Tempranillo, Chardonnay and Syrah.

Strangely this decline is in the period when its reputation as a quality grape variety was rising. So the question is, what is going on? There are two seemingly contrasting trends:

1. The removal of huge areas of plantings in France and Spain

EU subsidies, put in place to protect grape growers, led to a chronic overproduction of grapes and wine for which there was no market. In 2008 the EU addressed the issue by removing subsidies for this unwanted wine, known as the European wine lake. Further, it paid growers to remove unwanted vineyards. As can be seen in the chart below, between 2000–2016, Spain reduced its land planted with Garnacha by 44 per cent and France by 18 per cent. 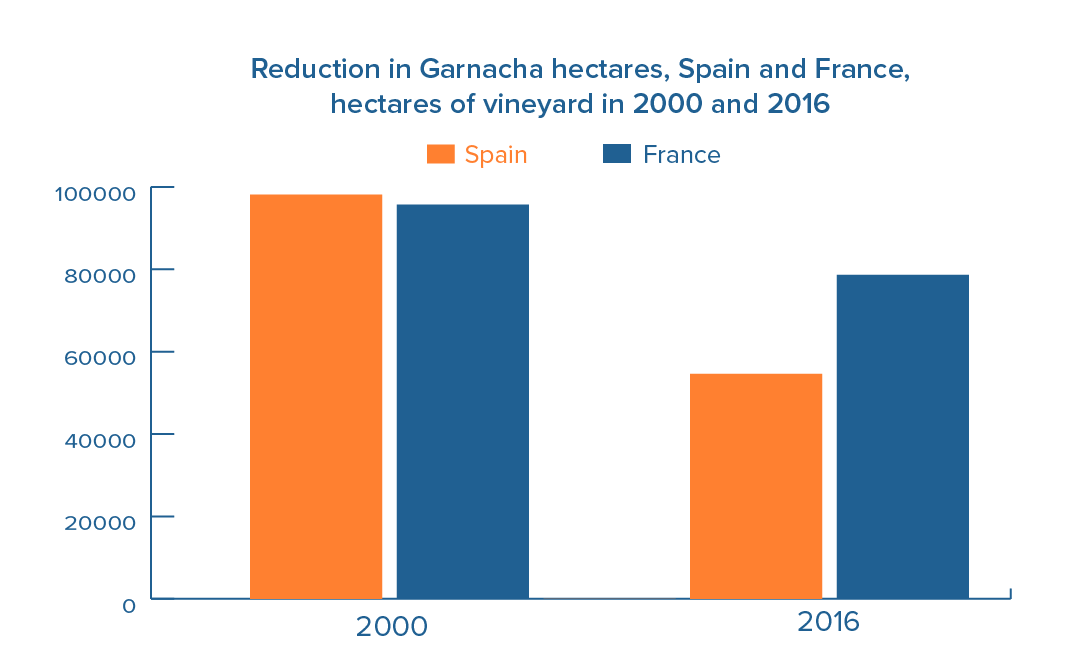 This imbalance in the market was in part brought about by the long-term decline in wine consumption in France and Spain. It was accelerated by the rise in popularity of fruity, inexpensive wine from non-European wine-producing countries like Australia or South Africa.

As a result, huge volumes of inexpensive Garnacha-based wine had no market, and many vines were removed. Nor was it just in France and Spain that these vineyards were decreasing. In all but one of the seven countries with more than 1,000 hectares, the vineyard area of this variety has decreased since the year 2000. (The exception is China which has a very recent history of grape growing for wine.)

At the same time, the second trend is that high-quality Garnacha is increasingly being valued in places as varied as Châteauneuf-du-Pape, the Californian coast, South Australia and Priorat.

Priorat has established itself as a very high-quality region for Garnacha wines. 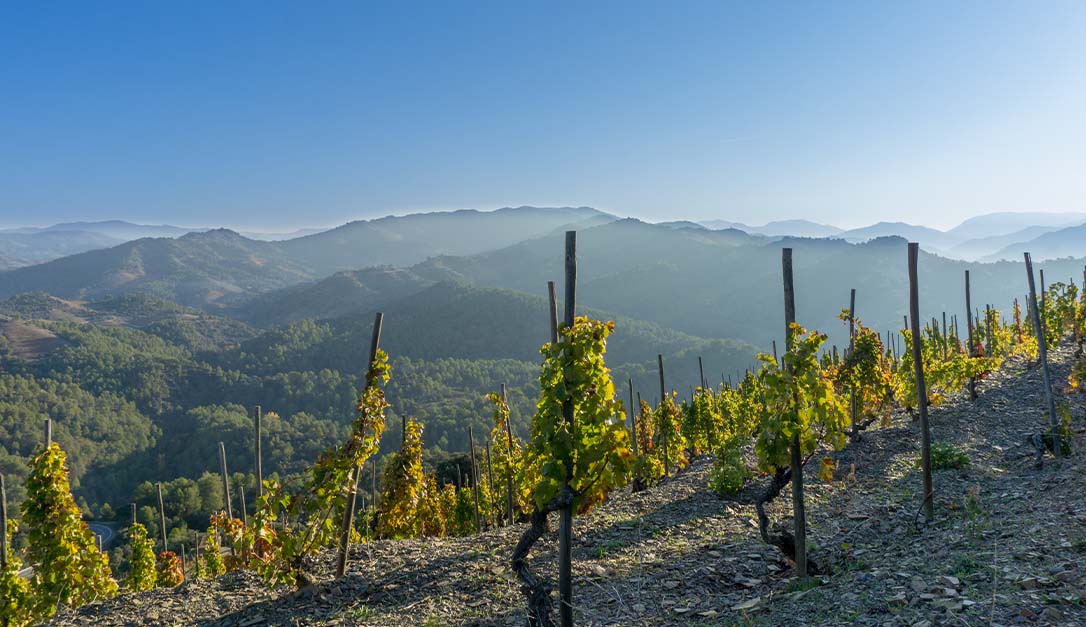 Thus, overall, the picture is of significant drops in the total area of Garnacha vineyard while at the same time, its contribution to high-quality wine is increasingly being recognised.

Garnacha in the vineyard and the winery

As a variety, Garnacha vines have strong wood and an upright growth. This makes the variety well suited to be grown as bush vines in hot, dry, windy vineyards. It has good resistance to drought that can be further improved by planting it with drought-resistant rootstocks. Its suitability for hot and dry conditions makes Garnacha an attractive option in an increasingly warming climate. The level of tannins in the skins and in the final wine depends on the degree of water stress - higher stress leading to more tannins.

However, Garnacha is not without its problems in the vineyard. The variety buds early, making it prone to spring frost, and suffers from coulure (irregular flowering and fruit set), reducing yields. It is susceptible to many other common vine diseases but not to the main diseases affecting a vine's permanent wood, esca and eutypa dieback. This may explain why many old vines survive and can produce very high-quality wines if at low yields. The variety has a long growth cycle, can reach high sugar levels, and needs a long season for the seeds and skins to ripen fully. Its sturdy trunk means it is often harvested by hand.

In the winery, it is very prone to oxidation and loss of its already relatively light colour. As a result, care must be taken to reduce contact with oxygen, for example, by racking the wine off as few times as possible. Better quality wines are often aged in oak barrels, but the use of new oak is unusual as its additional flavours would mask Garnacha's fruitiness, one of its key features.

In general, the variety produces relatively pale red or rosé wines that are very fruity and ripe-tasting. Red fruit flavours are most typical. The wines have varying levels of tannin, medium acidity and typically high levels of alcohol naturally (14% abv and above). 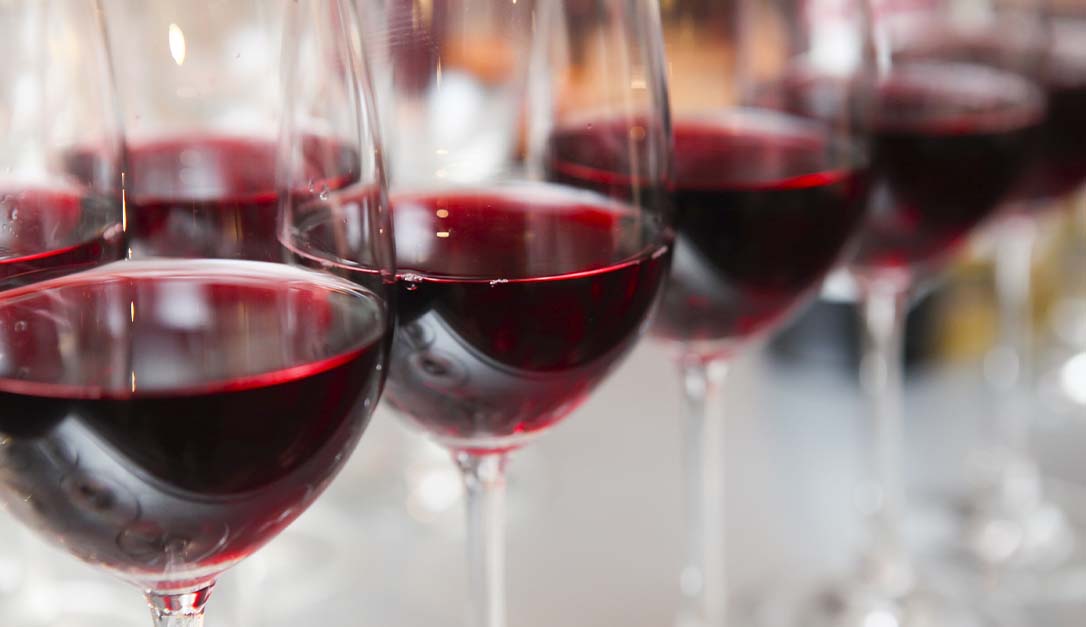 It can be made in a wide range of styles:

Garnacha is a fascinating variety, which on closer inspection, throws up a surprising number of questions. But, whether you call it Garnacha or Grenache, this variety is becoming something of a star for its versatility, its resistance to drought and to trunk diseases and, most important of all, its ability to be made into delicious wines at a range of prices.

Data used for all graphs from Anderson and Nelgen